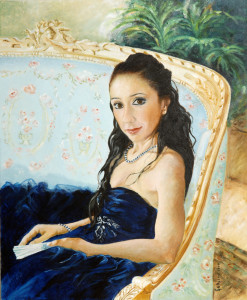 1992 – 1997 she studied Classical Dance, Historical, Character, Step Two, Repertoire, Tip Tap with the Masters of the Teatro Alla Scala in Milan. She passes the examinations with the Imperial Society of Dancing of Teachers in London.

Improvement and in-depth courses with:

– Teacher at the Taniez Club Dance School
– She teaches at the Alcarotti Dance School
– Artistic Director of the Cultural Association “Il Centro”
– Teacher at the Music School “Perpetual Motion”
– Dancer in a company of Contemporary Dance as a soloist
– She dances much of the classical repertoire, including “The Four Temperaments”, “The Spring of Vivaldi”, “Sleeping Beauty”, “Swan Lake”, “The Carnival of Animals”, “Carmen”, “An American in Paris”, “Giselle”, “La Silfide”, “Esmeralda”, “La Bayadere”, “La bottega fantastica”, “Revelations”.

– Founder of the Cultural Association Academy

– Founder of the ETOILE Ballet School

– Collaborates with the Elementary Schools of Novara

– Collaborates with the middle schools of Momo, Carpignano Sesia and Oleggio

– Founder of the Ballet Etoile Company, composed of 18 dancers www.etoileoleggio.it

– Collaborates in the meantime with Liliana Cosi, Paola Jorio, Bella Ratchinskaja and with Leon Cino and Kledi Kadiu of the “Amici” show.

Performed perfermances as a choreographer:

The Divine Comedy, The Island that is not there, 7 places for Broadway, The Prince Buddha.